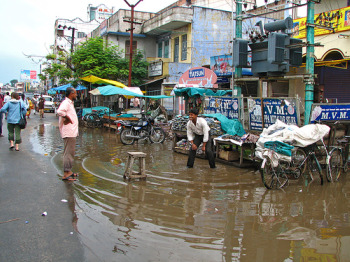 June to September is monsoon season in India, a time when moisture-laden winds from the Indian Ocean dump tons of rain on the country. The air is hot, wet, sticky and oppressive, and it rains so much that flooding is nearly guaranteed. So why would anyone want to travel to India during this time?

Well, first of all, the monsoon season hits harder in some areas than others, so you shouldn’t write off a visit to the entire country. When the monsoon hits India, it splits into two parts – one moves up the coastal side of the Western Ghats while the other heads towards the Eastern Himalaya range. Because of this Mumbai, Calcutta, Darjeeling and Shillong receive the most rain, while Delhi, Bangalore and Hyderabad, and Chennai receiving much less, and Rajasthan and  Ladakh are actually quite pleasant during this time.

The monsoon arrival changes every year, but you can begin to expect it around June 1 in the west, with arrival in Delhi by the end of June, and the rest of India by mid-July. After the first few days of heavy rain, the showers become more unpredictable. It may rain near constantly for hours or days on end, or it may rain very little on one day, while the sun shines and temperatures rise. The majority of the rain comes during July, and by August it begins tapering off, so if you plan your trip strategically, you may be able to avoid the worst of the rain.

If you plan your trip right, can avoid much of the rain, but not all of it. Luckily there are some upsides to traveling in India in monsoon season. For starters, there are fewer tourists, and in a place as crowded and heavily touristed as India, that makes a big difference. You’ll also save money as during off-season,  flights to India are often discounted, and India travel deals abound. Deals are especially prevalent in the bigger cities and those that receive more rain. You may be able to score Mumbai hotels or Calcutta hotels at unbelievably low prices. You’ll also get to see India at one of its most beautiful times, for with the rain comes a beautiful landscape of green.