Things To Do In Mumbai 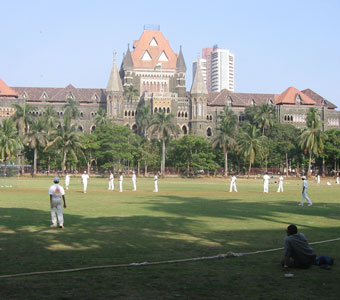 Perhaps the country’s most cosmopolitan city, Mumbai presents a mosaic of film stars, vast slums, filthy rich, meagerly poor, a new, emerging middle class and gastronomic galore. Typically called by locals by its former name of “Bombay,” this city is made up of a cluster of seven islands and inhabited by 17 million Mumbaikers… making this metropolis one of the most populated cities in the world.

In 1661, Mumbai was presented to King Charles II as part of the dowry when he married Princess Catherine de Braganza of Portugal. After leasing the land to the East India Company, the British propelled Mumbai on its quest for industry with docks and trading posts on its plentiful ports.

Most recently targeted by terror attacks in 2008, it did not take long for this city to emerge from the ashes and prove everlasting resilience. 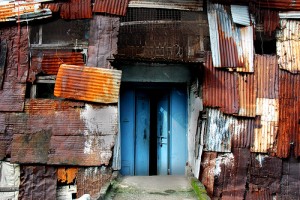 Even pre-Slumdog, visitors could sneak a peek at what goes on behind the scenes in Mumbai’s infamous Dharavi slums. Don’t let the moniker fool you, these hidden alleyways expose how thousands can live in small quarters, make a living, feed families and freely practice various religions. Officials say small scale businesses like tailoring shops, grain stores, bakery shops and leather tanning produce over $650 million in annual revenues…making this a true city within a city and must see. But remember, for the sake of privacy, no pictures please! 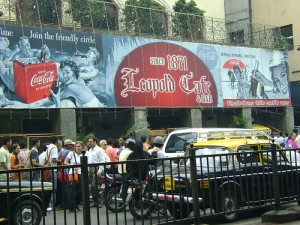 A target during the November, 2008 attacks on the city, Café Leopold re-opened its doors wider than ever. A watering hole for expats and tourists – “Leo” remains an institution as one of the oldest Irani run restaurants, founded in 1871. The bar and café serves more than 330 menu items that includes Indian, Chinese, Continental cuisine all for a reasonable prices. But most patrons can be found swigging down beer or, perhaps, flipping through ‘Shantaram,’ the popular book among Leo’s clientele about an Australian bank robber fleeing to Bombay with frequent mention of the Café. And don’t be alarmed if a Bollywood scout makes his approach.Scouts tend to utilize Leo to solicit westerners to get their “5 minutes” as extras in current productions.

The Gateway of India 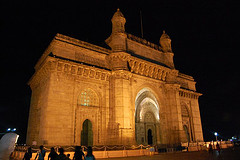 This striking archway hovers 26 meters high on Mumbai’s waterfront. The sculpture was built to commemorate the visit of King George V and Queen Mary to India in 1911, and for years after, its Indo-Saracenic architectural style welcomed viceroys, governors and top civil servants as they disembarked from their steamers. The last British troops to leave India passed through the gate in a ceremony in 1948. Now the gateway is a prescribed hangout and usually the first point of interest for Mumbai’s visitors.

Monkeying Around on Elephanta Island 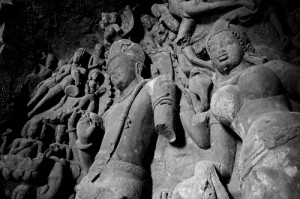 Designated an UNESCO World Heritage Site, the rock-cut caves at Elephanta Island is a worthy day trip from the bustle of Mumbai. The hour-long boat ride departs from the Gateway of India, reaching the island the Portuguese named for a stone elephant found on its shores. Visitors must climb a vast staircase to the 9th century caves, the path lined with a flurry of vendors selling trinkets and souvenirs– But if the hike is too much, climbers can pay locals to carry them in a chair for a few rupees. The six square mile island is the home to about 1200 locals mainly involved in growing rice, fishing and repairing boats. But beware of the rambunctious monkeys, they’ve been known to snatch a water bottle or two right out of visitors’ hands. 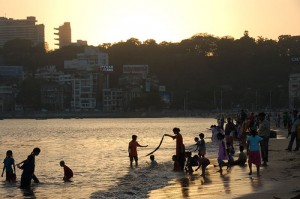 Bring a little appetite to Chowpatty – loads of kiosks selling Mumbai’s favorite snacks like Bhelpuri and Kulfi are a must for first timers. Then frolic with a wealth of entertainers like masseurs, snake charmers, contortionists and monkey trainers. Chowpatty also has historical significance for the city, as a place where the masses gathered for political meetings before India’s independence. Now celebrations like Coconut Day and the Ganesh Chaturthi immersions attract locals and tourists alike. And at night, get bedazzled by the “Queen’s Necklace” – a theatrical view of street lamps that light up Marine Drive along the beach. 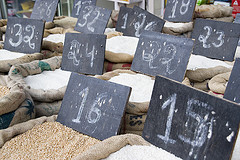 Capture a piece of Mumbai at the city’s largest marketplace for a reasonable price. Trinkets, shawls, food, antiques, clothes, shoes, CDs, electronics, jewelry and art can all be found in this shoppers haven.

Developed in 1838 and renovated again in 1861 and 1863 became a commerce center as a cotton exchange, then by the early 1950s the causeway gradually became known as the city’s most fashionable shopping center.

Bollywood and the Multiplex Experience 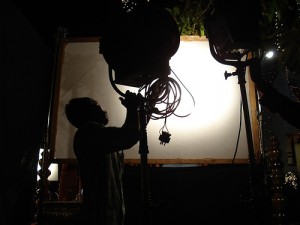 For the true Indian entertainment emersion, check out a Bollywood flick at one of the city’s multiplexes. These are unlike any film experience moviegoers would have in the States. The average film is about 3 hours with not only a plot, but an inundation of singing and dancing broken up with an intermission half-way through. The obsession with cinema paved way for perfumed auditoriums, plush seats and state-of-the-art audio and projection systems. Some cinemas have restaurants attached or snacks delivered at the seats, gaming parlors and even valet parking. And for those who desire a true first hand experience, a studio tour will may hit the spot. Too many to name, consult your hotel concierge or reserve a tour from home beforehand. 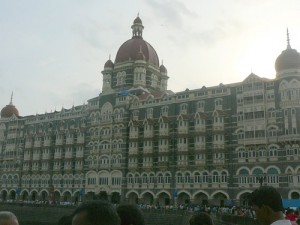 A perennial stop for royalty, The Taj Mahal Palace and Tower has welcomed some of the most notable characters of the last century including the Beatles, Bill Clinton, Mick Jagger and Jacqueline Kennedy Onassis. The iconic building opened its doors in 1905 and was used as a hospital during the World War I. The two distinct buildings contain 565 rooms, along with luxury shops and restaurants. Guests can also enjoy a lavish poolside for some necessary cooling off from the India sun.