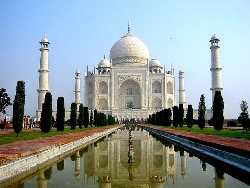 An ode to love, Taj Mahal became UNESCO World Heritage Site in 1983. It’s one of the most photographed buildings in the world and is considered the finest example of Mughal architecture.

Taj Mahal is located in Agra, a city in the north Indian state of Pradesh. Agra lies at about 200 km / 124 miles from the capital, New Delhi.

Taj Mahal stands pretty much in the center of the town and it’s easy to spot due to the huge crowds trying to get it at any time. During weekends and public holidays it’s extremely crowded. The western gate is the main one used by tourists but when it’s too crowded you should go to the southern or eastern gate.

How to get to Taj Mahal

Agra is very well connected via air, road and railway to all of the other major Indian cities.

Flights between Agra and Delhi are available on a daily basis.

There are three main train stations in the city, connecting it to the rest of the country.

What is Taj Mahal ?

The Taj is a mausoleum which was built under Mughal Emperor Shah Jahan in memory of his favorite wife, Mumtaz Mahal. It’s considered an ode to love and should be viewed as such.

The Taj is considered the finest example of Mughal architecture. This style combines elements from Persian, Turkish, Indian and Islamic architectural styles.

Although the most famous building is the domed marble, Taj Mahal is actually a complex comprising several other buildings, gardens and reflection pools.

The focus of the complex is the white marble tomb (see photo left). The top of the dome is decorated with a lotus design which makes it look even taller.

The tomb is surrounded by a garden with pathways and flowerbeds. Halfway between the tomb and the gateway (see photo right) there is a reflection pool. All over the garden there are trees and fountains. 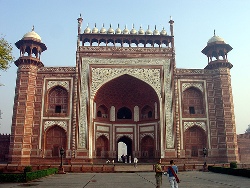 Plan to get to the mausoleum as early as possible to beat the crowds. Also, make sure to visit it both at dawn and dusk. Under full moon it’s stunning. There are night views on the nights when there’s full moon except on Fridays and the month of Ramadan.

You ARE ALLOWED to bring with you:

For security reasons you are only allowed to bring in five items:

You ARE NOT ALLOWED to bring with you

You can always leave those items at the locker service for the tourists but do that on your own risk.