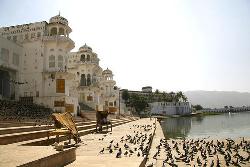 Pushkar is one of the five sacred dhams (pilgrimage places for Hindus), home to the colorful Pushkar Camel Fair and a very popular town among tourists.

Pushkar is located at only 14 km from Ajmer and lies on the shores of Pushkar Lake.

How to get to Pushkar

The nearest airport is in Jaipur, while buses can be taken from Ajmer. Also, there’s a train connection between Delhi and Ajmer, while the direct trains run from Ahmedabad, Bangalore, Chennai and Mumbai.

Pushkar is one of the oldest cities in India although the date of its actually founding is not known.

According to the Hindu mythology, the gods released a swan with a lotus flower in its peak and let it fall on Earth. The place where it landed was called Pushkar.

Most of the important tourist sites are located around the lake can easily be visited on foot. If you plan to climb up to the Savriti temple (see below) make sure to have a good pair of walking shoes.

Pushkar Lake is one of the main attractions of the city. It’s a holy place and there are 52 “Ghats” (smaller temples) spread along the shores. Devote Hindus consider the holy bath on Kartik Purnima to be salvation giving.

Jagat Pita Shri Brahma temple is a very important pilgrimage site for Hindus. It is believed that Lord Brahma performed a Yagya here. It is, without a doubt, the most famous temple in Pushkar and is the only temple dedicated to Lord Brahma. 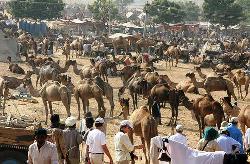 Pushkar Camel Fair (see photo right) is the world’s largest camel fair, which draws both tourists and merchants every year. The Fair is also popular for interesting competitions. The Fair takes place on the banks for the lake. It’s held on Kartik Purnima, which falls either in October or November. Men buy and sell their livestock – camels, cows, goats, sheep – while women check out the fabrics, bracelets and clothes stalls. The fair starts with a camel race and there are several events going on during the fair.

Here’s an interactive map to help you get to Pushkar