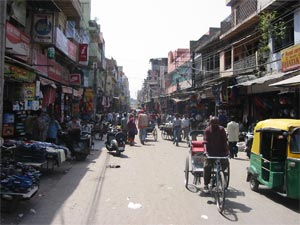 When researching where you should stay in Delhi, if your budget is low you’ll quickly notice that almost all the cheaper places near the city center are in the notorious Paharganj (sometimes written Pahar Ganj) neighborhood. This area does have quite a few things going for it, but before you lock in your reservation you should consider the downsides, which aren’t widely reported in most places.

The good things about Paharganj

Location
Its location immediately next to the giant New Delhi Railway Station is a major positive. Since many of the long distance trains, as well as the daily trains to Agra, leave quite early in the morning, this location about a 5 or 10-minute walk from the platforms is very convenient.

Cheap accommodation
This is definitely the area most densely packed with budget hotels and hostels. If you haven’t a reservation then this is the easiest place to go door-to-door looking for a decent room. 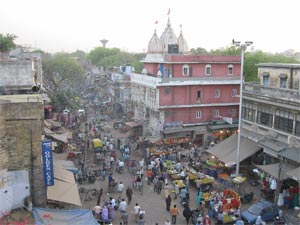 In addition to all the budget hotels and souvenir shops, there are hundreds of small restaurants and food carts mixed in to this neighborhood. Most of the places are quite cheap, and most are actually jammed with locals much of the time too, so you don’t have to worry much about being tricked into being ripped off at tourist trap places. There are a few of those mixed in, but you’ll have plenty of choices where locals go if you pay attention. There’s even an outdoor food market in the center, which can be really worthwhile on its own.

The bad things about Paharganj

It’s a dump
This area has quite a bit in common with the famous Kho San Road in Bangkok, but one thing they don’t have in common is that Paharganj is really quite dirty, even compared to most of the rest of central Delhi, which is saying something. Kho San Road is just crowded and hectic, but still quite clean. Seriously, there are some reasonably nice hotel districts in Delhi, but this isn’t one of them.

It’s not really safe
With the high concentration of tourists here, petty criminals in Delhi have an endless supply of targets. The streets are packed around the clock, and reports of pickpockets and even muggings are more common here than most other areas in the city. If you do come through here, keep your wits about you, and avoid dark alleys and so forth.

Many people will try to rip you off 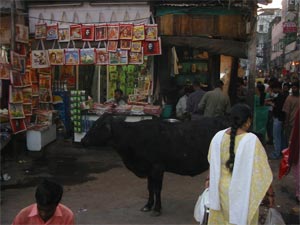 Just as with the general safety warning above, this area is always so full of unsuspecting tourists that it’s a magnet for crooked business people. The main strip of the Paharganj is mainly a pedestrian zone, but bicycle rickshaws are allowed and are common. If you exit the train station and climb into a bicycle rickshaw for a cheap trip to your hotel’s front door, you are almost guaranteed of being hustled, or at least they’ll try their hardest. Even if you are going to walk to a hotel, a tout, who’ll put you through this same nonsense, is likely track you.

Those with reservations or preferences for specific popular places will be told their place is full or burned down, and the driver knows of a better place. The “better” place will be a complete dump that can’t get bookings through normal means, so they get business by offering large commissions to any guests brought by touts or drivers.

Even if the driver or tout agrees to lead you to the place you are booked at or had in mind, they might take you to another place anyway. Their English language skills will have disappeared, and they’ll not understand why you don’t instead want to stay at this “better” place. This is just one example of the sort of treatment you’ll be in for. It’s important to be cautious and not give in to them when they are scamming you, as it only encourages them to do it to the next person.

The Pahar Ganj neighborhood is fascinating, and almost certainly worth seeing, especially if you’ll be coming through the New Delhi Railway Station at some point. And again, the hotels in this area are cheaper than in any other central district, so if your budget is low you might be stuck here anyway. Super cheap hotels can be found almost everywhere in India, except for in the big cities, so this area does serve a purpose for the backpacker set.

If you can, you might want to come through this neighborhood during the day, and then decide if you want to book a room here. It’s a worthwhile place to visit, and many will be fine staying here. But you might also decide that it’s worth spending US$10 more for a hotel elsewhere. After you’ve read the warnings above you’ll at least be in a position to know what you are dealing with.