India will always be popular for the RTW crowd 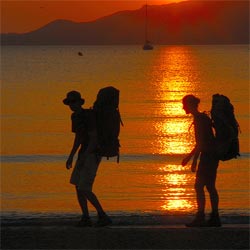 This country has an incredibly long list of fascinating (and frustrating) aspects to it, but almost none of that matters to RTW travelers. In case you haven’t seen that acronym before, RTW stands for “round the world” and India is a cherished stop on almost every itinerary that can squeeze it in.

True, with about one-sixth of the world’s population, it’s a wonder why anyone wouldn’t be interested in visiting, but to be honest the big thing that draws many people here is the fact that compared to the rest of the world, India is dirt cheap.

Many people will enter as part of an around the world plane ticket, which is actually a much better bargain than most people realize. Sure, you can stitch together flights as you go, but many people make the mistake of thinking they can save money this way. With very few exceptions, they can’t. When you get to Bangkok or Istanbul, depending on which direction you are coming from, you’ll discover that tickets to India usually aren’t quite as cheap as tickets from London to Amsterdam, for example. There are loads of international fees and taxes involved, so the price will never be as low as within a tight economic region.

Where to stay in India

Here’s the part where the magic happens for RTW travelers. If you look online for cheap hotels in India you’ll find some pretty tempting prices, but places you can book online represent like the top one-third, price-range-wise. In other words, if you see that you can book a hotel in Mumbai or Jaipur for say, US$50 per night, chances are you can actually get a hotel yourself once in that city for perhaps US$20 or even less.

The huge cities, namely Mumbai and Delhi, tend to be more expensive than the rest of the country, but that’s okay because you’ll probably want to minimize your time in those places anyway. (If you don’t think so now, just wait until you arrive.)

Outside of those two enormous cities, you can actually find decent bargains online, but again, this will only be the most modern and expensive places. You might have heard of hotel rooms costing only US$1 per night, and those do exist, but don’t expect it to look like the Holiday Inn. You’ll get a basic and modest room with a bed that is softer than the ground it’s sitting on, by at least a little bit.

You can easily find a really cheap room in just about any city in India you find yourself in, but you’ll also have to deal with the notorious hotel touts, not to mention the crooked taxi and autorickshaw drivers who’ll just take you to where they get the highest commission, regardless of where you ask to go.

Once you figure out how to play the game, you’ll be able to find acceptable rooms in many parts of the country for around US$5 per night, and in some cases even less. You can sometimes find a bit of luxury like a fridge and satellite TV for under US$10 per night. Just book your rooms online for the first couple nights and you’ll figure out how to get these great deals once you get used to the place a bit.