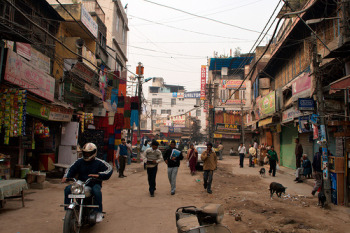 For whatever reason, the idea of a round the world trip and a trip to India are often tied together. Perhaps it’s because for many people in the west, traveling in India is some of the most challenging travel they’ll ever do – and a round-the-world trip is also a huge challenge. In fact, many people on RTW trips include India on their itinerary, never to go back later in life. So it’s a good idea to make that time in India count!

Another thing that might connect RTW travel with India travel is that the people who typically take longer RTW trips – the people who are more aptly described as vagabonds – tend to be those free-spirited types for whom a long time spent in India is a life goal. Those wanderers are also the kind who seem to really enjoy places like Goa, if you know what I mean.

Finally, India is one of the countries where your money will go further. It’s usually not hard to find cheap tickets to India, whether it’s part of a RTW itinerary or not. India is also full of cheap accommodation options, and your other travel expenses – namely food and entertainment – will put a far smaller dent in your wallet in India than in many other places around the world.

Still, with all these perks, there are some very real challenges when traveling in India – and with doing a long-term round the world trip. Most of them aren’t really life-threatening, but you don’t have to look too far to find stories of people suffering from digestive issues in India (even if they’re being careful). And you never know when a simple upset stomach will turn into a more serious case of food poisoning. In other words, it never hurts to at least get a travel insurance quote before you leave home.