How to get to Goa, India 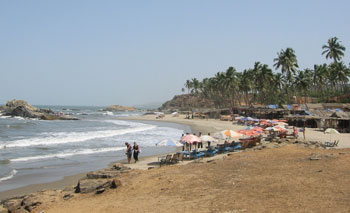 As the party season for foreign tourists is about to start once again I thought I’d cover something that people frequently ask me about travel in India, namely, how exactly to get to Goa. Fortunately it’s easy to do, but still we’ll just go over a few things below.

In general, cheap air tickets to India can be found most of the year through various promotions, but it’s always best to start your hunt early since last-minute fares might be crazy high if you get unlucky.

Goa is a state of mind, and an actual state

One thing that isn’t too obvious for most people at first is that Goa isn’t a city or a community, it’s a state in southwestern India. It’s actually India’s smallest state by area, and it has only around 1.4 million residents, which is tiny for this country.

There is a city called Old Goa (or Velha Goa in Portuguese), and it has some historic buildings in it, but that’s not really what you are coming to Goa for anyway. This is a state that has hundreds of small villages in it, plus a long string of beach towns that each have their own vibe and reasons for coming. For example, Vagator is the town where fans of Goa Trance and beach raves usually go. Anjuna is home to the famous hippie market and a pretty chill place in general, and Callungute is a larger beach area that is popular with Indian nationals, especially outside of tourist season.

If you are intent on flying all the way, and that’s not a bad idea, then you’ll want to point to Dabolim Airport in the village of that same name. The airport code is GOI (not GOA), and airfare to Goa can be surprisingly cheap considering the flights you’ll usually take to get there.

Generally speaking it will cost around US$100 more for a ticket all the way to Goa than it will for a ticket to Mumbai or airfare to Delhi. If you land in either of those cities it’ll cost around US$130 to US$150 on local budget airlines if you want to book that portion independently. The disadvantages of booking these flights separately is that you’ll probably pay a bit more and also you might be stuck if your first flight gets in late and your next flight has already left.

The Goa airport is a sleeply little place compared to airports in the big cities, but still there will be a selection of taxis and autorickshaws waiting for you when you arrive. The airport isn’t too close to any of the popular beaches, so the cab ride will take 20 minutes at least. Taxis are cheap around here, but of course it’s critical to settle on a fare before you begin, and don’t be afraid to bargain.

Most people have heard the stories about India’s rail network being the largest in the world. That part is definitely true, but still things work very differently here than they do in Europe, for example. The most common way to get to Goa on a train is to start in Mumbai and take the daily train that leaves very early in the morning. It’s about 12 hours to Goa, and you’ll have several choices of stops in the state, so figure out which one you want early on. In other words, there will not be an announcement that “this is the Goa stop” because there are several and none are just called “Goa.”

You’ll also want to book that journey a few days in advance if you can. In Europe you can usually just wait an hour or two and another will be doing the same route, but in India the trains that are suitable for tourists tend to go only once or twice each day and that’s it.

The train journey will only cost around US$25 or less, even in one of the nicer classes, but it makes for a long day.