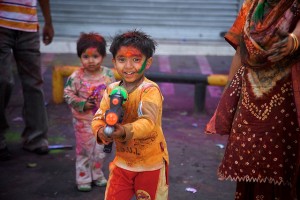 Holi , or the Festival of Colors, is a religious spring festival celebrated by the Hindus. It is observed in India, Nepal and Pakistan, and in countries with large Indian Diaspora. The most celebrated Holi is in India’s Braj region, in all locations connected to the Lord Krishna. Needless to say that these locations related to the Lord Krishna – Mathura, Vrindavan, Nandagaon, and Barsana – have become major tourist attractions during the Holi Festival.

The festival was traced to ancient Bengal. Back then it was a Gaudiya Vaishnav festival, when people went to the Krishna temples and applied red color to the icon. Then the red color was also distributed to families and kids. The meaning of red is passion and Lord Krishna is the king of desires.

However, the earliest reference to the celebration of Holi is found in the 7th century Sanskrit drama, Ratnavali.

In some Indian states, Holi is known as Dolyatra or Basanta-Utsav.

When is Holi celebrated?

The festival is celebrated at the end of the winter season on Phalgun Purnima, which falls by the end of February or early March. In 2012, Holi falls on March 8.

What happens during the festival? 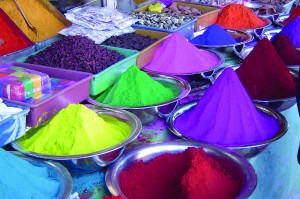 The main day, Holi, is celebrated by participants throwing colored powder and colored water at each other. On the eve of the festival, bonfires are lit, also known as Holika Dahan. The reason for this is to celebrate the memory of the miraculous escape that young Prahlad, which happened when Demoness Holika, sister of Hiranyakashipu, carried him into the fire. Holika was burnt but Prahlad escaped without injuries. After the bonfires are lit, prayers are said.

In most areas, Holi lasts for two days. The festival closes the social gaps, bringing all Hindus together, regardless of age, sex or status. The social norms also seem to not exist during Holi, as no one expects polite behavior.

What does Holi Festival mean?

First of all, it celebrates the beginning of a new season (spring). The festival also has a religious purpose, as it commemorates events from the Hindu mythology.

Where to be in India for Holi festival?

Barsana is definitely the place to be for Holi. Here, the Lath Mar holi is played, when women beat men with sticks.

If you want to experience the traditional festival, then in Mathura the day is dedicated to the Lord Krishna. And the festival lasts for 16 days.

In Goa, Holi is part of the festival known as Śigmo.

In Manipur, the festival is celebrated for six days. Young children go from home to home to collect money , as gifts on the first two days of Holi. Music is performed during the night and a large procession takes place near the main Krishna temple on the last day of the festival.

Should you want to participate, you can learn here how to make natural colors.