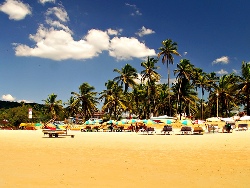 With its beautiful beaches and charming Portuguese buildings, Goa is undoubtedly the holiday capital of South Asia. Its European-Asian mix, beaches and culture attract over 400,000 foreign tourists annually and many more from the other regions in India. Goa is also famous for its temples and other important monuments.

India’s smallest state in term of area, Goa is located on the west coast of India and is bordered by the Arabian Sea to the west. The state’s capital is Panaji.

The most important cities in the region, besides the capital, include: Margao, Vasco da Gama, Old Goa, Mapusa and Ponda.

How to get to Goa

Goa can be reached by plane, car/bus or train.

The main attractions in Goa are the beaches, followed by the temples and churches.

The most important beaches in Goa include:

Goa is also an important diving center. The diving season lasts from mid-October to mid-May. The dive sites are all around Grande Island just off the coast of Vasco da Gama.

Numerous museums, temples and churches are also important landmarks in the region. Visit the cathedrals in Old Goa.

Unfortunately Goa lacks good maps and the locals get confused if you ask about longer distances. So just ask about the closest village on the road.

Part of the region lacks sign-boards which only adds to the confusion and is pretty much impossible to find your way after dusk. The easiest way is to ask the locals.