Getting from Delhi to Shimla 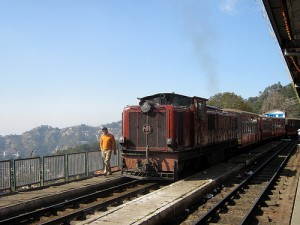 Delhi ,one of the oldest cities in the world, is the main gateway into the country and where most international travelers land. Being a major domestic hub as well, it only makes sense to plan your trips around India from here.

Shimla, formerly known as Simla, is a popular tourist destination and the capital of Himachal Pradesh. It is often referred to as the “Queen of Hills”, but is also famous for the tudorbethan and neo-gothic architecture dating from the colonial era. The city is located in north-west Himalayas and is draped in trees. It experiences pleasant summers and cold, snowy winters.

A lovely and cheap way to travel between Delhi and Shimla is by express train to Kalka and then on another express train via the Kalka-Shimla Railway for the last leg of the trip. If you don’t mind a long bus ride (8 ½ h) on winding mountain roads (at least for a part of the journey) then the bus is also a good option.

Check out these indie travel tips for Delhi.

Shimla is served by Jubbarhatti Airport (SLV) , which is located quite close to the city but it can take hours to handle the road to/from the city. Direct flights to/from Delhi are operated by Kingfisher Airlines. The flight time is 1 h and the fares start around Rs 6096 / US$115 one way .

Another cheaper option is Chandigarh Airport (IXC) , located about 120 km from Shimla. Direct flights to/from Delhi are operated by Air India, Jet Airways and Kingfisher Airlines. The flight time is 45 min to 1h and the single fares start at Rs 2652 / US$50 on Jet Airways.

Trains from Delhi to Shimla

Shimla is connected to the city of Kalka by the Kalka-Shimla Railway, one of the longest narrow gauge railway routes still operating in India.

You can arrive in Shimla from Delhi is by the Shatabdi Express, which departs New Delhi at 7:40 a.m. every day. The travel time to Shimla, via Kalka, is 9 h 40 min.

Or you can catch one of the 10 trains which connect Delhi to Kalka and then hop on one of the trains operating on the Kalka-Shimla Railway for the rest of the journey. There are four departures per day from Kalka and five on the way back.

For the Delhi to Kalka leg of the trip , expect so spend at least 4h in the train. The tickets on the Shatabdi Express cost from Rs 465 one way but on slower trains (also express) you can get away with Rs 107 one way.

You can get more info about the fares and schedules on the India Rail Website .

Buses from Delhi to Shimla

Driving from Delhi to Shimla

You can rent a car in Delhi and drive the 375 km to Shimla on NH 22. It should take about 7 hours but remember that part of the road crosses the mountains so you should be very careful when driving.