Getting from Bangalore to Pondicherry 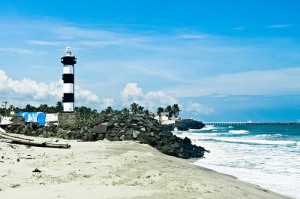 Bengaluru, formerly known as Bangalore, is the capital of the Indian state of Karnataka, a large and cosmopolitan city in India. It is the major center of India’s IT industry.

Pondicherry, affectionately known as Pondi, is located in Southern India and was the largest French colony in India. It still has a strong French influence , particularly in the old quarters.

The cheapest option to travel between the two cities is by train , but you’ll be stuck in it for quite a lot of time (10 ½ h). Another good and cheap option is the bus , with a shorter travel time but slightly more expensive ticket.

Bangalore is served by Bengaluru International Airport (BLR). The airport is located 40 km from the central business district and handles both domestic and international traffic. It is hub for Blue Dart Aviation, Deccan Aviation and Kingfisher Airlines.

The closest airport to Pondicherry is Chennai International Airport (MAA). It is the third busiest airport in India in terms of passengers. The airport is hub for the following airlines: Air India, Air India Cargo, Blue Dart Aviation, Jet Airways and Spicejet.

Flights between Bangalore and Chennai are operated by: Air India, Air India Regional, IndiGo, Jet Airways, Kingfisher Airlines and SpiceJet. The travel time is 40 min to 1 h. Regardless on when you fly in 2012 , expect to pay from Rs 2768 / US$52 one way on JetLite or Kingfisher Air.

From Chennai you need to take the bus to Pondicherry. There are 7 departures per day from Chennai, operated by two companies. Buses leave between 1:50 p.m. and 11:15 p.m. Single fares start at Rs 220 / US$4.

Buses from Bangalore to Pondicherry

Trains from Bangalore to Pondicherry

Trains depart from Yesvantpur Junction or Bangalore City Junction, the railway stations serving Bangalore. However, the only direct train between the two cities , Puducherry Express, leaves Yesvantpur Junction on Fridays at 11:15 p.m. and arrives at its destination 10 ½ h later. The fare is Rs 381 / US$7 (in a car with AC).

Driving from Bangalore to Pondicherry