Getting from Bangalore to Mysore 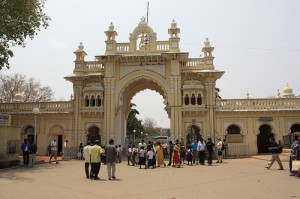 Bengaluru, formerly known and still referred to as Bangalore, is a large and cosmopolitan city in India. It also one of the biggest travel hubs, offering direct links to large Indian cities.

Mysore is located in Southern India and is the second cleanest city in the country. The city is served by a domestic airport but there aren’t any flights from Bangalore. Actually, Bangalore’s airport is the closest international airport to Mysore.

Fares for both the express trains and the AC buses are the same so it’s a matter of choosing the one you like best. Or the cheaper non-AC bus seat.

Trains from Bangalore to Mysore

Should you prefer to travel by train from Bangalore to Mysore, then you’ve got 21 trains to choose from, although not all of them run daily (15 of them do, though). The first train leaves Bangalore at 2 a.m. and the last one at 11:55 p.m. The travel time is between 2 ½ h and 4 h, depending on the train you choose. On the express trains, the general rate is Rs 41 , while if you choose an AC car, then the rate starts at Rs 248. On the way back, catch the trains at Mysore between 00:30 a.m. and 11:55 p.m. The same fares apply.

Buses from Bangalore to Mysore

There are plenty of buses running between Bangalore and Mysore. This company KSRTC.in runs buses every hour (and in some cases even every half an hour) between the two cities. The buses are all AC and the fares start around Rs 250 (info via forums) one way.

Of course, other companies also run buses between Bangalore and Mysore and the one way fares start at Rs 150 (non –AC).

Driving from Bangalore to Mysore

Not taking into account the speed bumps which will make you slow down even when there isn’t a clear reason why, the drive from Bangalore to Mysore is actually a pleasant one. The traffic is quite heavy though. Still, you can rent a car and drive the 150 km in about 3 – 3 ½ h via State Highway 17.