Getting from Delhi to Jaipur 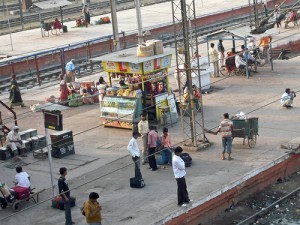 Delhi is one of the oldest cities in the world. Part of it, New Delhi, is India’s capital. The climate of the city is infamously bad , with scorching hot temperatures from April to October , monsoons from July to September and near-freezing temperatures in December and January. Delhi is the main gateway into the country and where most international travelers land.

Jaipur, also known as the Pink City, is the capital of Rajasthan . It was India’s first planned city and today is one of the major tourist attractions in the country. It belongs to the tourist Golden Triangle, which also comprises Delhi and Agra. It is home to important sights such as the City Palace, Birla Temple, several massive Rajpur forts and serves as a gateway into the desert cities of Jodhpur and Jaisalmer.

The cheap options for traveling between Delhi and Jaipur are: the trains and the buses. The travel times are quite similar, but some trains are faster than buses. Look for express trains or , if you choose the bus, for those with AC.

Jaipur International Airport (JAI) is located about 13 km from Jaipur and is the only international airport in Rajasthan. It isn’t hub for any airline and handles mostly domestic flights.

Trains from Delhi to Jaipur

India Railway offers 23 trains between Delhi and Jaipur . Out of those, 10 trains operate on a daily basis. The travel time is between 4h 50 min and 6h 10 min and depends on the type of train and stops along the way. Most of the trains depart early in the morning. The general fare on an express train starts at Rs 74 one way. But keep in mind that fares depend on the train and hour of departure.

Buses from Delhi to Jaipur

There are 16 buses per day between Delhi and Jaipur . Most of them depart Delhi in the evening (from 6:30 p.m. to 10:30 p.m.) but daytime buses are also available. The travel time is about 6 hours. Fares star at Rs 220 one way in a sleeper without AC.

You can check the schedules, fares and book tickets on this website (which lists all operators).

Driving from Delhi to Jaipur

Another option is to rent a car in Delhi and drive the 265 km to Jaipur on NH 8. The travel time is about 4 hours.