Getting from Delhi to Amritsar 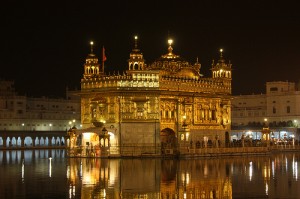 Delhi is India’s second largest metropolis. Part of it, New Delhi, is the capital of the India, but remember that the names are used interchangeably. So, whether one referrers to Delhi or New Delhi, they mean the same thing: the capital of India.

Amritsar is a holy city in the state of Punjab. Its name derives from the pool around the Golden Temple. Amritsar is a spiritual and cultural center of the Sikh religion. It is also a major pilgrimage site and a famous tourism center. It’s best to visit Amritsar during winter (October to March).

While trains are cheaper than buses, for just US$14* you can ride an AC bus between Delhi and Amritsar in about 8 h. Flying is faster but more expensive (although still affordable).

Delhi is served by Indira Gandhi International Airport (DEL), which is the main international airport in the National Capital Region of Delhi. It is located 16 km from New Delhi and is the busiest airport in India in terms of traffic. The airport is hub for the following airlines: Air India, Air India Regional, Blue Dart Aviation, GoAir, IndiGo, Jagson Airlines, JetLite, Jet Airways, Kingfisher Airlines and SpiceJet.

Sri Guru Ram Das Jee International Airport (ATQ) is the airport serving Amritsar and the entire state of Punjab. It is located 11 km from the city and handles both domestic and international flights.

Flights between Delhi and Amritsar are operated by: Air India , Jet Airways and Kingfisher Airlines. The flight time is an hour.

Trains from Delhi to Amritsar

Unlike in Europe, buying train tickets in India can be quite an adventure. However, you can check the timetable on line .

The first train leaves H Nizamuddin at 3:47 a.m. every day of the week. The last one leaves the same station at 8:15 p.m. on Mon, Tue, Fri and Sat. There are , in total, 23 departures from Delhi to Amritsar.

Buses from Delhi to Amritsar

Driving from Delhi to Amritsar

Should be brave enough to attempt to rent a car and drive in India , then be prepared for about 500 km of driving between Delhi and Amritsar. You can take NH 10 or NH 71. The drive time is about 8 hours, so make sure to plan some stops along the way.

Note:*at the time the article was written