Getting from Delhi to Agra 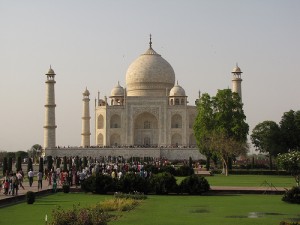 Agra is known as the city of Taj Mahal . Located about 200 km from Delhi , Agra is actually home to three UNESCO World Heritage sites: the Taj Mahal, the Agra Fort and Fatehpur Sikri (located near-by the city).

Although Agra is served by an airport, there aren’t any scheduled flights available. So, travelers are left with traveling overland between Delhi and Agra.

The best way to travel between Delhi and Agra is by train. There are many connections per day between the two cities, but make sure to aim for the express trains.

Agra can be easily visited as a side trip from Delhi. Wake up in the morning and get on a train to Agra. Breakfast is usually served on board and you’ll arrive in Agra ready for a day of sightseeing. Taj Mahal and Agra Fort don’t take too much of your time, so you are left with time for visiting other sights in the area, as well.

Trains from Delhi to Agra

According to India Rail there are 101 trains between New Delhi and Agra. This happens because Agra is on two main trains lines: Delhi to Mumbai and Delhi to Chennai. About half of them operate on a daily basis. The travel time is between 3h and 4 h, depending on the type of train and stops along the way. On an express train operating during the day, expect to pay Rs 83 one way for the general fare . Evening trains also offer sleepers, which cost from Rs 140 one way. Do note that the fares depend on the train and hour of departure.

Buses from Delhi to Agra

It is also possible to travel by bus between Delhi and Agra. There are seven departures per day operated by two companies. The schedule and fares can be viewed on this website . The travel time is about 6 hours and fares start at Rs 350 one way (no AC). On the way back catch one of the5 buses available during the entire day (7 a.m. to 6:30 p.m.). The fare is Rs 353 one way (AC).

Driving from Delhi to Agra

You can also rent a car and drive the 204 km between the two cities on NH2. Another option is Yamuna Express Way but the drive time is similar for both routes (about 3 hours).