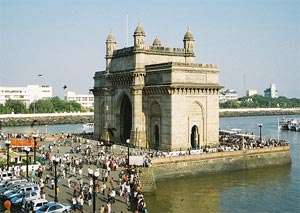 Conveniently located in the tourist-friendly Colaba district of Mumbai, the Gateway of India is one of the most impressive and easiest to visit sights in this huge city. The 26-meter-tall arched structure was meant to welcome the British monarch. Even though it looks much older, it was only completed in 1924, and by the time the British sailed away from Bombay Harbour for good in 1948, the Gateway had become a sore reminder of an era most Indians would rather forget.

Today the large plaza beneath the Gateway of India serves many functions, partly as the central focus and meeting area in the bustling Colaba district, which is filled with hotels in all price categories that are popular with foreign tourists in particular. Immediately behind the Gateway of India stands the Taj Mahal Palace & Tower, which is the largest and most posh hotel in the area, as well as one of the most famous hotels in all of India.

Things to do at the Gateway to India

Never-ending bazaar – The large open area below and surrounding the arch is always filled with street performers, vendors, photographers, snake charmers, and just about anyone else who wants a guaranteed audience in front of a largely tourist crowd that also includes commuting locals.

Ferries to Elephanta Island – The boat ride takes about an hour to this island of ancient cave temples with their intricate sculptures and carvings. This day trip is at least as popular with locals as it is with tourists. Locals pay a lower fare on the ferries, but the price for foreigners is still extremely reasonable by most standards (around US$2 to US$3 for the return trip).

Bollywood movie casting – Since Mumbai is the film capital of the world (in many ways) and there is often a need for Western extras to appear in these films, casting crews regularly scour the area around the Gateway of India looking for interested parties. You’ll usually be offered a background part for the following day, including lunch and perhaps a small payment.

City tours – Since this area is so filled with visitors at most times, many private drivers will solicit business here. They might seem shady as they approach you, but most of them are very legit. It tends to be a buyer’s market, so you can often ask for a lower price since another driver will be standing right there. The normal prices can be shockingly low, so you might not even bother negotiating.