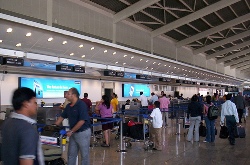 The boom in the Indian tourism industry during the past years has lead to major investments in the Indian air industry. Several low-cost carriers entered the Indian market which makes flying in India even cheaper. The domestic airline carriers have purchased new aircrafts which greatly helped the air travel and the tourists alike.

There are over 65 airports in India and also five which handle both international and domestic flights. All of the important Indians cities have an airport, which makes flying one of the fastest and cheapest ways to move from one city to another.

Tips to get a cheap ticket when flying in India

With so many airports and airlines, flying is the fastest way to move in India. There are plenty of low cost carriers so it won’t be that hard to find a cheap domestic flight in India. The tickets are so cheap nowadays that the Indian railways are afraid of the competition.

Check the airlines’ websites and see if you can book in advance. The majority of them do offer this possibility.

The lowest prices are offered by companies such as GoAir, Deccan, Kingfisher and Spice Jet.

There are also packages offered by several airlines which include the possibility to travel on specified domestic flights in India. Such packages cost around 15000 Rs and all include Economy Class unlimited travel on the destinations specified in the packages.