Dhobi Ghat in Mumbai – Watch your laundry get beaten clean 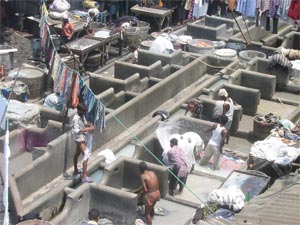 Once you get to Mumbai you’ll notice that the city is an almost absurd combination of new and old. There are new skyscrapers in certain neighborhoods, grand old colonial buildings from the late 19th and early 20th centuries mixed in, as well as buildings and customs that seem like they could be 1,000 years old. The large central laundry area in Mumbai known as Dhobi Ghat is a fascinating piece of entertainment that isn’t easy to reach for many people, but it’s worth a look if you can make it.

What is the Dhobi Ghat?

This is actually a generic term that means a place to wash clothes and linens in India and Pakistan. A dhobi is the fellow who does the washing, and the ghat generally means steps on a riverbank where locals bath. In Mumbai there are multiple places where this sort of washing takes place, but the huge one that people refer to is in the Mahalxmi neighborhood, just a short distance from the grand Mahalxmi horse racing course. 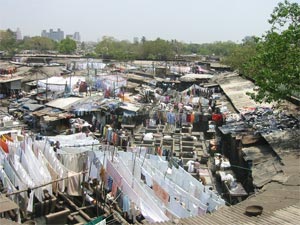 You can get a nice view from the bridge just next to it. From there you’ll see the big stone tubs where the men soak the clothes in a bit of soap, and then they beat the dirt out of them, before pressing and hanging them out to dry. There are around 200 families that have been in this business for many generations, and obviously the method has not changed much as time has gone on.

Getting to the Dhobi Ghat

Unless you are attending the races next door, or taking a commuter train to the Mahalakshmi Station, it’s unlikely you’ll be walking through this neighborhood on your own. It’s between the main part of downtown Mumbai and the Colaba district where many tourists stay, but far enough from both that you’ll have to make a special trip. Taxis in Mumbai are cheap, so getting one out here is easy, or you can ask a driver you hire for the day, which is also cheap, to make sure to include this on his route. You’ll be able to see everything in just a few minutes, and get some great photographs.

Having your own laundry done here

Another great thing about Mumbai and India in general, is that as long as you are staying in a budget hotel you can get your own laundry done for next to nothing. A whole suitcase of clothes might only cost US$2-3, and that includes a small commission for your hotel people. If you send your laundry out this way there’s a decent chance it’ll end up here, and be returned to you in perfect shape at the end of the day.

Map of the Dohbi Ghat

A video of the Dhobi Ghat in action