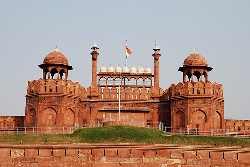 India’s second largest metropolis and home to three UNESCO World Heritage Sites, Delhi is an amazing cosmopolitan town. Often “confused” with New Delhi – India’s capital since 1947 and part of Delhi – this magnificent city offers a lot of interesting things to see and do.

Over the centuries, Delhi has been the capital of several ancient Indian empires. Shahjahan, the Mughal emperor built the city – now known as “Old City” – which served as capital of the empire from 1649 to 1857.

When the British Raj took control of India, Calcutta – now Kolkata – became the capital. But in the 1920s a new capital has been built – New Delhi – and it remains area’s administrative quarter. When India obtained its independence in 1947 New Delhi was declared the capital and seat of Government. Several other important offices of the federal government are also located here.

So although New Delhi is only a part of Delhi the names are often used interchangeably.

Delhi is the second largest metropolis in India and is located on the banks of the River Yamuna in northern India.

How to get to Delhi

Indira Gandhi International Airport is Delhi’s airport and the main gateway to the city. It handles both international and domestic flights and it’s notorious for being overcrowded mostly during peak hours (middle of the night for the international flights and early morning for the domestic ones). Because of how it’s set up and the security measures you should allow at least 3 hours if you have to connect between terminals and 2 hours to pass through security. The safest (and easiest) way to get from the airport to the city is to arrange for transport ahead of time. Most hotels would charge a fee for the shuttle but some offer them for free.

Note: if you travel to Delhi in December or January please note that due to heavy fog both international and domestic flights might be canceled (plan for 1-2 days in such cases).

There are three main train stations – Old Delhi, New Delhi and Hazrat Nizamuddin – which connect Delhi to the rest of the country.

Delhi has a semi-arid climate and the temperature variations between summer and winter are high. Summers last from April to September and also comprise the monsoon season (July and August). During summer the temperatures are really hot: 40 C/ 104 F is pretty common although the average is little lower. Winters start in October and are at their coldest in January. The temperature reaches extremes and January is notorious for the heavy fog.

The pleasant seasons are February to April and September to November when temperatures are lower (20-30 C / 68- 86F) but February is wet.

The staff at the Government of India Tourist Office located in Connaught Place is very helpful and offers all the information you need for free. Just make sure to not go to other tourist offices which sell their own travel packages while pretending they are the official tourist office.

Note: the only open entrance is Lahore Gate, on the west side and security is thigh both when you enter the fort and when you visit it. Backpacks are allowed but they are X-rayed. Tickets cost 100 Rs for foreigners and you have to pay 25 Rs if you want to take photos.

Humayun’s Tomb is located in south Delhi and is open daily from sunrise and sunset. Tickets cost 250 Rs for foreigners. The complex comprises several important buildings, such as the Tomb of Iza Khan, the tomb of Humayun and the Barber’s Tomb. 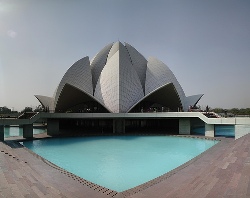 Qutb Minar and its Monuments is a complex in south Delhi. Its gardens are kept in excellent shape. The complex is open daily from sunrise to sunset and tickets cost 250 Rs for foreigners. The most important structure is Qutb Minar.

Jama Masjid is the largest mosque in India and definitely a must-see. Entry is free but you have to pay to take photos.

Baha’i Lotus Temple (see photo right) is shaped liked a lotus bud with 27 petals. It’s impressive from outside but there is little to see inside. Entrance is free.