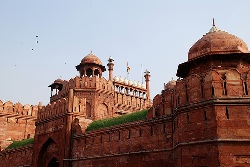 Also known as Lal Qil’ah, or Lal Qila, the Red Fort located in Delhi is a UNESCO World Heritage Site and the largest monument in Old Delhi.

Red Fort stands along Yamuna River in Old Delhi. The river used to feed the moat which surrounds most of the fort’s wall.

The fort got its name from the thick red sandstone walls. Mughal Emperor Shahjahan started the construction of the fort in 1638. Ten years later, the complex was finished. The turrets, bastions and walls withstood the time and still marvel the travelers. Some of the walls are as high as 33 meters.

The main entrance to the fort opens to Chatta Chowk, a shopping street filled with jewelry stores and other high-end merchandise. As you enter the fort, you’ll reach the Drum House, the heart of the fort, where musicians used to play for the emperor and his guests.

Hall of Public Audiences used to be the place where the emperor listened to the complaints of people. The alcove in the wall was set in precious stones but most of them were looted during the war of independence.

Diwan-i-Khas is the hall of private audiences. It’s made of marble and its most important attraction is the Peacock Throne.

Khas Mahal contains the imperial chambers, including the bedrooms, prayer rooms and a tower.

Moti Masjid or the Pearl Mosque was built in 1659 as a private mosque. The mosque is carved in white marble.

Hayat Bakhsh Bagh is a large garden located in the north part of the complex. It’s cut through by two channels which converge in a pool. Unfortunately now all channels are dry.

Security in and around Red Fort is heavy particularly after the terrorist attack in 2000. Bags are allowed but all are x-rayed.

Red Fort is opened daily from sunrise to sunset. It’s closed on Monday.

Tickets cost 100 Rs for foreigners and you’ll pay 25 Rs more if you want to take photos or film.

Use this interactive map to easily find out how to get to the Red Fort.