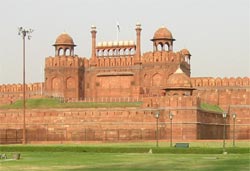 I’m not ashamed to admit that I didn’t know the difference between Delhi and New Delhi until around the time I started researching for my first trip to India. Even when I started looking into it, it wasn’t immediately clear. It seems that during my childhood I’d only ever heard of New Delhi, probably because it’s the official capital of the country. Later I heard people referring to Delhi without the “new” part and I thought perhaps this was either a condensed name for the same place, or another city in India altogether. It turns out both of these are wrong.

Now that I know how they relate to each other I am even more conscious than ever when I hear people who aren’t aware of this distinction misuse the city names. Typically I’ll hear someone saying New Delhi when they really mean Delhi, mostly, I’m guessing, because the new one seems to be way more famous than the old one among people who’ve never been here.

So what’s the difference?

The short version is: New Delhi is one of 9 official districts that make up the giant city of Delhi. It’s also the capital of the country, so in a way it’s an independent territory in the same way that Washington DC and Canberra are independent of the states that surround them.

Maps only add to the confusion. If you search for “Delhi” on Google Maps or Google Earth, it will just zoom in on New Delhi with no explanation. I’d imagine this is because since New Delhi is the capital and they always make those large and in charge on maps, there is no easy way for them to let people know that it’s a small district tucked into a huge city. The best map showing the real situation is this one from the Delhi Wikipedia page. 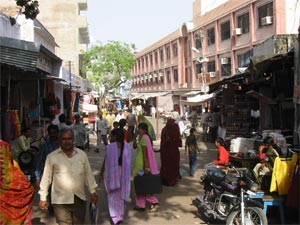 The second largest metropolis in India (after Mumbai), Delhi has well over 14 million residents, and it continues to grow rapidly as those unable to make a decent living in rural areas keep moving to this urban environment looking for a better go of it. There is, as you might imagine, extreme poverty here and hundreds, if not thousands of shanty town-type settlements mixed in wherever there is room. There’s also extreme wealth, and some very stylish neighborhoods, in addition to what serves as a middle class that keeps everything operating.

The colonial capital of India was in Calcutta, but in 1911 King George V (who was both the king of the United Kingdom and the Emperor of India back then) decided it should be moved to Delhi. They began building a new government district near the center of Delhi, and they called it New Delhi. Most of the major tourist attractions (and there are plenty) are in Delhi, though some notable ones are within New Delhi.

Indira Gandhi International Airport, which is the main airport serving the region, is in the southwestern corner of Delhi, even though the Wikipedia page and many other sources claim that it’s in New Delhi. 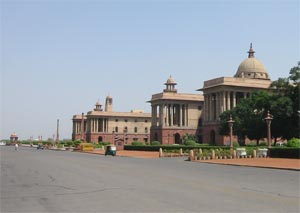 The city of New Delhi has only about 350,000 permanent residents, and is completely surrounded by the city of Delhi. The administrative part of New Delhi was a planned district, designed in the early 20th century by a British architect. The government buildings here started filling up in the 1920s, and after the British left in 1947 New Delhi became the official seat of government of India.

Today you’ll find the Indian Parliament building, all the other federal government headquarters, and all the embassies in the southern part of New Delhi. This area is mostly spotless, with wide streets and lush lawns in front of many buildings. It’s an amazing contrast to all of Delhi that surrounds it, and if not for the legions of thieving monkeys (no joke) you’d forget you were in India.

Just north of the capital area is the circular district called Connaught Place, which is now a shopping area that isn’t as nice as it must have been in its heyday. Just a bit north and west of Connaught Place you’ll find the infamous Paharganj backpacker district, which has many of the cheapest hotels in the area. In spite of the fact that it’s located within New Delhi and filled with tourists, it’s quite a dump and probably not the best place to stay unless your budget is very low. Just across from the Paharganj area is the New Delhi Railway Station, which is the largest in the entire city of Delhi.