Cows in India – It’s good to be sacred

It’s common knowledge that cows are considered ‘sacred’ in India, and you might have heard stories from past visitors who are astonished that “cows are right there in the street!” Well, it’s true, for better or worse. Even in tourist neighborhoods in the giant cities of Mumbai and Delhi, you’ll randomly encounter a cow just doing whatever he or she pleases. Tourists can’t believe their eyes, especially as the local reaction tends to be that when they are in traffic they’ll steer around them (pardon the pun) , or if they are on the sidewalk or in a crowded market they will rub them for good luck instead of shooing them away.

Folks who grew up in cities sometimes think of the cow as a proud and noble creature who is mistreated every moment until it departs this mortal coil, but once you interact with these beasts in your everyday life it’s a bit harder to have sympathy for them. They’ll really never show any emotion at all, but the one thing you always suspect is they are pretty psyched to be large and in charge, totally able to create a traffic bottleneck if that’s their goal for that particular day.

Below are some examples that show you what it’s like to weigh 1,000 pounds and be thought of as sacred in a third world country. 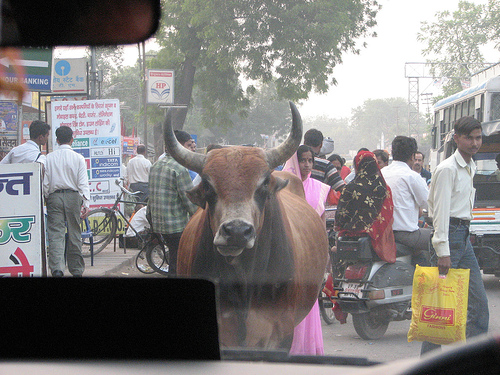 Here’s a traffic v. cow encounter in Agra (home of the Taj Mahal). By the look on the cow’s face it’s pretty easy to figure out who eventually had to go around whom. 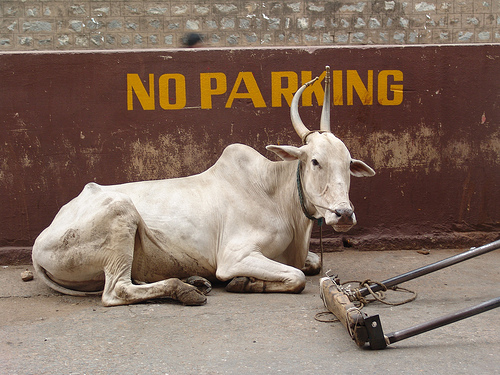 Here’s a cow in Bangalore who’s obviously in the mood to chill. Some people criticize him for not being able to read, and others reckon it was him who painted that message there in the first place, just to reserve this spot when he needs it. 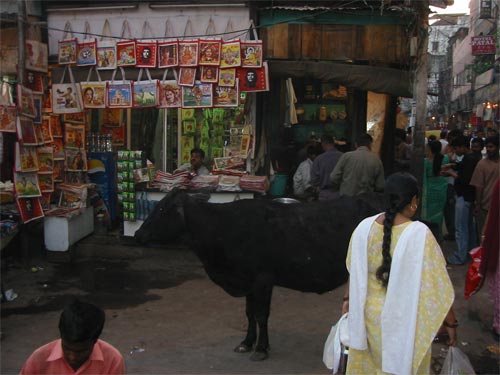 Here’s a cow I photographed in the notorious backpacker’s ghetto of Paharganj in New Delhi. He really had his eye on one of those Che Guevara tote bags hanging up there, and it took me over 30 minutes to convince him how ironic that whole concept was, and that he’d struggle to carry it anyway. I’m still not sure he didn’t buy it shortly after I left though. 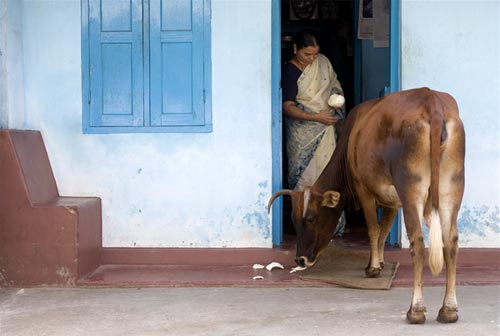 “Knock, knock,” said this cow in Kochi in the southern state of Kerela, “I don’t suppose you have some cabbage or whatnot in there for me, do you?” 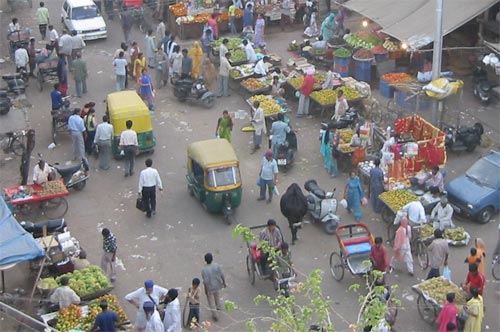 He’s not super easy to spot, but the cow in this photo of the Paharganj fruit market is locally known as “Waldo”, for his fondness for showing up alone in otherwise-complicated tourist photos. 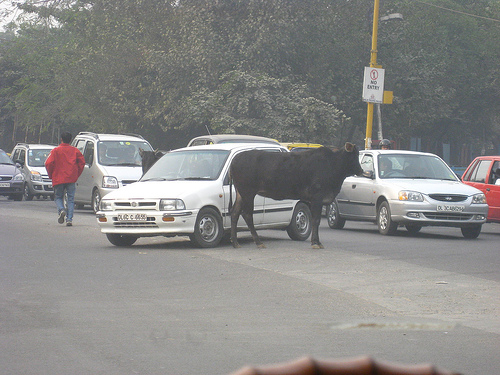 Here’s another cow in Delhi (a city of about 16 million) who has decided there’s no place he’d rather be at this point in time than in the center of this busy intersection. Can you blame him? It is a pretty sweet intersection. 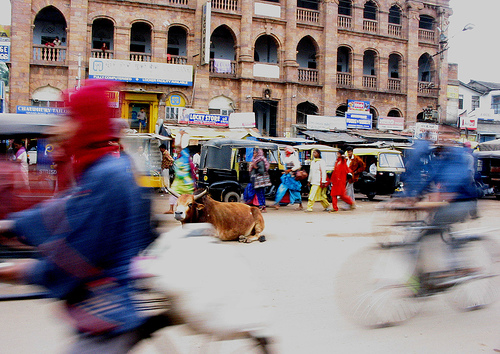 “Life goes by pretty fast,” this Ferris Bueller-obsessed cow in an unidentified city in India is obviously thinking to himself, “If you don’t stop and look around once in a while, you could miss it.” 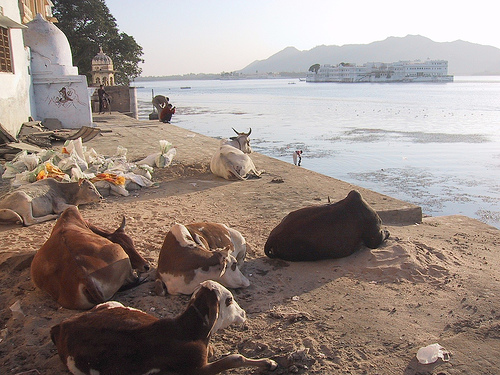 In spite of a standard of living that is considered low by Western cow norms, family beach vacations are still within reach of your typical cow in India. This handsome group was photographed on Palolem Beach in the former Portuguese state of Goa, which is one of the few places that beef is actually on nearly every menu. 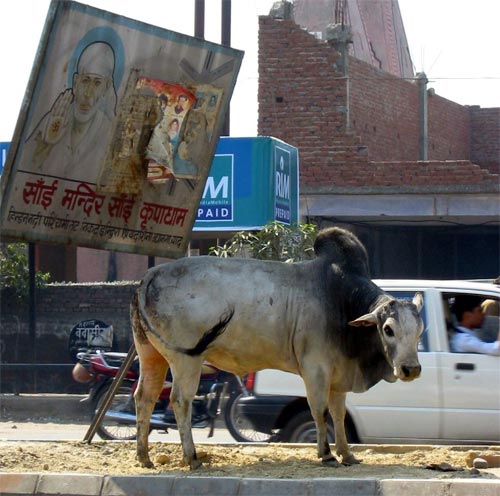 Here’s another cow in the outskirts of Delhi. Many of these guys like to hang out on the traffic medians for part of the day because they know when they step off all the cars have to stop, and if a car hits the cow it’s considered the driver’s fault, regardless if the cow signaled beforehand or not. 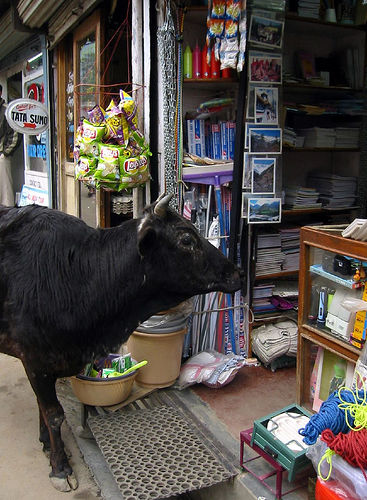 In spite of the Dharamsala cows being notoriously poor money managers, many of them like to spend a good chunk of each day window shopping for quality housewares and other nick nacks. 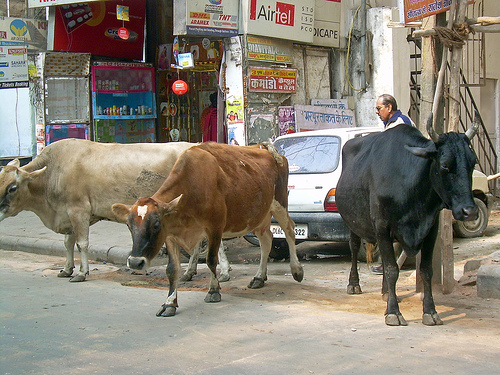 This Delhi-based cow gang just dares you to step to one of them. If they feel threatened they’ll start prancing around in West Side Story-style choreography moves, but for now things are cool, yo. 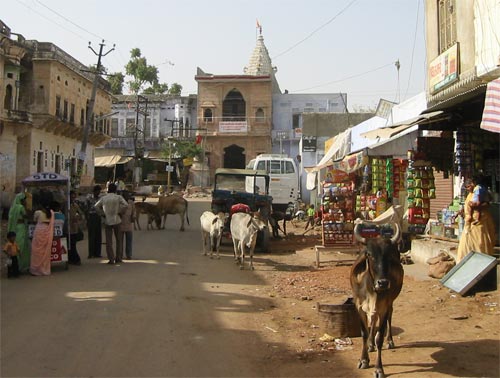 Here’s the leader of a Pushkar-based cow gang that I photographed with his posse. At this exact moment we were both thinking the exact same thing: “What’s up with that STD stand over there?”