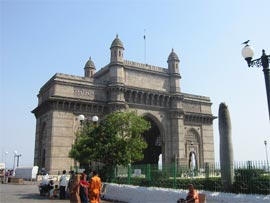 Mumbai (formerly known as Bombay) is a gigantic city with plenty to see, but the main tourist districts that are well suited to foreigners are few. You can find posh 4 and 5-star hotels in different parts of the city, and well-heeled travelers might be most comfortable in one of those, although some might be surprised to learn that those high-end hotels cost just as much in Mumbai as they do in Singapore, London, or New York City.

Colaba is probably Mumbai’s best neighborhood for foreign tourists who find themselves in the middle or even on the budget end of things, but the small island neighborhood also contains the city’s most famous high-end hotel, the Taj Mahal Palace & Tower Hotel. In describing as a “tourist neighborhood” you might get the impression that this feels like a walled community with tourists on the inside and all the locals on the outside, but it’s not like that at all. This is a thriving part of an incredibly crowded city, and for every other traveler you come across there will be anywhere between 10 and 100 locals.

What makes Colaba nice for travelers

There are scores of hotels from which to choose in this area, so it’s pretty easy to choose this small part of the city and then find a place to suit your style and budget. There are some relatively expensive places overlooking the harbor located on the street PJ Ramchandani Marg, and in the blocks immediately behind that street there are similar places with lower price tags. The view of the water is nice, but a good money saving tip is to find a hotel in the blocks just behind the main street mentioned above. 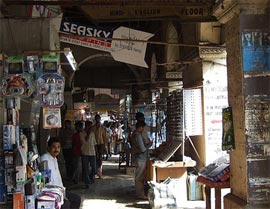 Of course with all those hotels, there are all the other businesses nearby that cater to the visitors. There are dozens of restaurants in addition to scores of food carts and other cheap fast-food opportunities, although you won’t find any major Western burger chains here. The main street for commerce is SBS Marg, which is a few blocks behind the harbor-front street. There you’ll find endless souvenir shops and internet places and bars, and even an old school movie house where you can see a Bollywood film in its natural environment. You’ll have plenty of chances to buy bootleg DVDs and other similar goods, so this is a good place for backpackers to pick up some cheap items that might be hard to find elsewhere.

Gateway of India
This giant arch is impressive enough to see and photograph, but just below the Gateway of India you’ll find a marketplace and outdoor theater area that is in constant motion. You can catch the ferries to Elephanta Island here, or be cast in a Bollywood movie if you get lucky and you have a day to kill.

Taj Mahal Palace & Tower
The name might sound cheesy considering it’s over 1,000 kilometers from the real one in Agra, but the Taj Mahal Palace & Tower hotel first opened in 1903 and has been considered one of the nicest in the city ever since. It’s very large, and even if you can’t afford to stay here a walk through the elegant lobby is worthwhile, especially if it’s steamy hot outside.

Good nightlife
The main central street of SBS Marg is home to many hip bars that are usually packed with locals most nights of the week. Places open and close so it’s hard to keep track here, but when you are in Colaba a good bar or club is never hard to find.