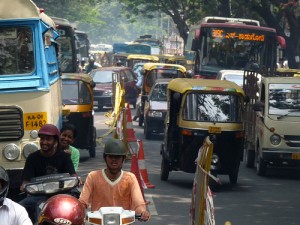 In general, each state has its own car rental agencies and you are allowed to pick up / drop off the car in many locations within the state. However, there are also car rental agencies such as Avis which allow booking online and you can pick up / drop off the car wherever they offer assistance in India. Such websites also allow booking a self drive car.

Prices and other info

Depending on where you plan to drive, you should choose either an economy car (if you plan to drive on highways and main roads) or an SUV (for tackling mountain roads or other bumpy roads). A Toyota Etios (or similar) will set you back Rs 2200 per day if you self drive , while the same car rented with a Chauffeur for 4 hours costs Rs 1100.

On Indian car rental websites, there is minimum number of km required if you want to rent a car. That’s 300 km and the fares start at Rs 7.50 / km depending on the car. The Toyota from the example above will set you back Rs 19 / km. Prices are usually quoted by 8 hrs / 80 km and the same Toyota costs Rs 2700 with Chauffeur. And yes, if you do not arrange for food and accommodation overnight for the driver, you pay an additional allowance of Rs 200. Prices vary depending on the company and the state they operate in.

Driving in India is a combination of doing your best and hoping your insurance agency takes care of the rest. No, really. Traffic rules? They exist but no one seems to care about them. And if you want to abide to them, you are more likely to cause an accident. Driving is both on the right and on the left…why? Because you do start on the left but in big cities you pretty much drive wherever there is a space and moving forward you occupy the next available space.

And let’s not forget the many drivers who got their license illegally. Which means they have pretty much no idea of what they are doing…just aim the car to the desired direction and push the gas pedal. Add to this the fact the most of them drive cars which only have seat belts as security options …and you pretty much know why the number of deaths on Indian roads is the highest in the world.

The horn is used to express anything but protest. And yes, it’s used to try to get the cows of the way. More about the cows and traffic here .

Expect traffic jams in the cities. There are plenty of reasons for them. While, if attempting to drive at night remember that nothing is what it seems to be. Trucks attempting to break speed records? Yup, you get it! Trucks with just one light on? But of course! During the day, you can see the trucks but don’t expect to figure out what they plan to do…because they never signal. And there are the buses which seem to go at incredible speeds.

In the cities you’ll also encounter the rickshaw, which is loaded to the max (and beyond). Mopeds will also give you a hard time. They are small and tend to move toward of the middle of the road.