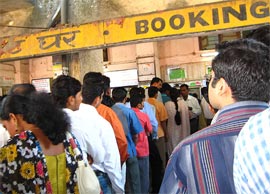 You may have heard that Indian Railways is the world’s largest employer, with over 1.6 million on staff at this government run transportation authority. That part is true, but that doesn’t mean buying tickets for trains while in India is easy or convenient. Far from it actually, this can be one of the bigger headaches of your trip if you don’t know your options.

Indian Railways operates about 9,000 trains per day all over the country, and while that number sounds very high, it doesn’t mean what you might expect. In Europe, for example, there are trains between every major city that can be as frequent as hourly through the day, with some overnight trains thrown in as well. But in India the major cities tend only to be connected by one to three departures each day, so you really have to plan in advance. Longer journeys might leave at noon one day and arrive at 6am the next day, for example. This is a huge country and there is no proper high-speed service, so you have to learn the schedule and then make plans at least a day or two in advance.

Again, this system is very unlike Europe in that you really can’t just expect to go to a station, buy a ticket, and climb aboard. Since there are so few departures between major cities, competition for seats is very high. The tickets themselves are quite cheap for most tourists, and most will want to book in one of the top few classes of service, and these seats (as well as most of the others) can often sell out a day or more in advance. Generally speaking, each seat is reserved in advance, with a specific name on the reservation. There are a few ways of getting around this, but you are better off planning ahead whenever possible.

One really nice thing about the Indian system is many of the more popular routes that tourists use have specific quotas for foreigners, meaning there will be seats on the train that locals don’t have access to (theoretically speaking). This prevents trains from being sold out to tourists weeks in advance, usually, and means getting a ticket a day or two ahead of time is not impossible.

Obviously each train station will have the normal ticket windows, but in India they can often have a zoo-like atmosphere. Lines can be extraordinarily long, and the locals tend to shove each other and cut in front of each other at even the slightest opening. Even stations in smaller towns can be miniature versions of this same thing, so these are best avoided if you can, which you usually can. 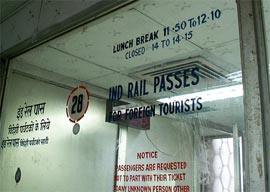 In larger cities and stations this will be a separate office and maybe even in a different building, but in smaller stations this might just be another group of lines in the main area. These are where you can get the foreign quota tickets, but this can be a big hassle as well. The office might be a bit nicer, and there might be chairs to sit in while you wait, but the lines can still be extremely long, and you’ve got some red tape to jump through. You have to pay for these tickets either in US dollars or British pounds, or in Indian rupees with proof of currency exchange for at least that amount. An ATM receipt and card should work, although sometimes they’ve been known to even refuse that combination. You’ll also need to present a passport, which shouldn’t be a problem.

In larger cities you can usually find people who will go through the above hassle for you in exchange for an added fee. Actually, in most cases these brokers probably go in the back door and pay a friend some baksheesh (a bribe) to skip the line altogether, but however they do it this can be very worthwhile. A ticket that might cost US$20 might cost US$4 through a broker, but that might be the best $4 you’ve spent. Just look for travel agent offices or kiosks near train stations. It will take them at least a few hours though, and maybe a day or more, so you have to do this in advance.

This is probably the best method of all, even though it’s the most expensive. Your hotel takes its own fee from the broker/travel agent system mentioned above, but they will do everything for you. Often when you check into your hotel they’ll ask you if you need an onward ticket. If you know the day you’ll want to leave and your next destination they can take care of the rest, and will have a ticket in your name waiting for you long before you’ll need it. You might end up paying US$28 for a US$20 ticket (and it will have the face value on the ticket when you receive it), but compared to all the headaches and wasted time of the normal system, this is a bargain. If you want to try to buy your own ticket the normal way just once, go ahead, and then you’ll be happy the hotels will do it for you from then on.