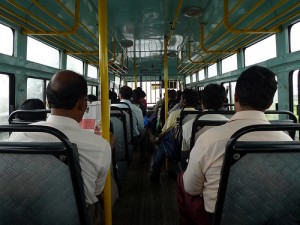 While traveling by train is probably the best way to tackle India, traveling by bus is the most common way to get around the country. It is also cheaper than traveling by train plus on some routes there aren’t any trains, so the bus is the only option. But it’s bumpy ride and it can take quite a bit longer. Bus service between major cities is available at short intervals and there are also long-haul bus services. Almost all cities and towns have their own “bus stand” (bus station).

Each state runs its own bus companies. Generally speaking there are two types of buses in India: the ordinary buses and the deluxe buses.

The “Ordinary Bus Service” is the cheapest option (as in dirt cheap) and makes stops in between destinations. Of course, people may be standing when there are no seats available. The buses are used by the regular crowd. These are the crowded buses travelers usually avoid, but adventurers might want to try. On some routes, however, these might be the only choice (less frequented places or shorter distances).

The “Deluxe Bus Service” is about 50% more expensive than the Ordinary bus. But they are worth the money and come to think about it, it’s not that expensive anyway. They carry a fixed number of passengers and reservations are not always needed in advance. They have a special place for the luggage and the seats are comfortable. These buses are used by the middle class and the travelers. The buses are almost always on time and are a good option for overnight journeys.

In recent years, a new type of bus has emerged. The “Volvo Bus”, which is basically a luxury bus service, with AC. Tickets cost more than on Deluxe Buses. The problem is that it may not be possible to buy tickets from the bus stand, but you can book online via websites such as MakeMyTrip . And they also don’t cover such an extensive destination network.

The problems arise with the lack of toilet facilities on buses (which can be really problematic for women travelers).