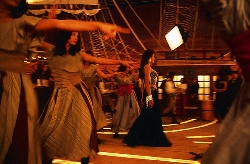 Everyone’s heard of Bollywood! Although sometimes used (wrongly!) to refer to the whole of Indian cinema, Bollywood is the informal term used for the Mumbai-based Hindi-language films in India. Whether a fan or not, everyone knows that music, dancing, colorful costumes and a lot of drama define pretty much any movie produced here.

The name appeared by “connected” Bombay (Mumbai’s old name) with Hollywood (the center of US film industry). But, unlike its American counterpart, Bollywood doesn’t exist as a real physical place.

Although many despise the name, it’s been so often used that it got its own place in the Oxford English Dictionary.

In 1913, the first silent movie was produced in India. The first Indian sound film Alam Ara, produced in 1931, was a huge hit. It clearly showed that musicals have a very large market in India. The late 1950s marked Bollywood’s first color films. The staple of the industry have always been romantic musicals and melodramas. In the mid-1970s, movies about violence started to be produced as well. The 2000s meant an explosion in popularity and now Bollywood produces all kinds of modern movies.

Most of the Bollywood movies are musicals and even if a movie is not a musical, some dancing and singing is expected. In most cases the soundtrack is released before the movie, which helps with the audience.

Also, most movies tend to be melodramatic. Generally they feature angry parents, love triangles, kidnaps, family ties, long lost relatives and anything that can help get a tear.

The music used in the films is known as “filmi” music. It’s always recorded by professional artists while the actors lip sync on location. Actors are generally very good dancers but not many are singers.

Bollywood movies were particularly famous in the former Soviet Union and the other communist countries. After the fall of communism, Bollywood movies are still rather popular in Europe but hardly ever among the young adults. They are, however, showed on television on a regular basis in UK, Germany, France or Romania.

Bollywood movies haven’t been that successful in South America though but are popular among the Indian communities in North America.

Seeing a Bollywood movie in India

It can be a fascinating cultural experience to actually go see a Bollywood film while in India. The locals are avid moviegoers, so you’ll likely have plenty of company. You can find theaters – often gorgeous (and run down) art deco cinemas of a bygone era – in almost every neighborhood in larger cities. Admission prices are usually dependent on which section you’ll sit in, but tickets will be under US$2 and often under US$1. If you are there on a hot day the air conditioning blasting through the theater might be worth the admission price just for a cool place to rest for a while.

Most of the “Bollywood” movies are primarily in Hindi, but producers purposely sprinkle enough English into the dialogue so English-only speakers should be able to follow the plot easily enough. Before the film begins you’ll likely be compelled to rise with the rest of the audience to salute a grainy film of a waving Indian flag while the national anthem plays. And since most of these movies last nearly 3 hours you’ll likely be treated to an intermission break at the halfway point.